Massimo Campigli (1895 – 1971), whose real name was Max Ihlenfeld, was born in Berlin in 1895. He spent his childhood in Italy, between Florence and Milan. After the Great War, the young Massimo moved to Paris, where he worked for the Italian daily Il Corriere della Sera. He drew illustrations for the newspaper. In Paris, he rubbed shoulders with artists such as Chirico, and regularly visited the Louvre Museum, whose classical and Egyptian collections inspired his work. He was also interested in the work of contemporary artists such as Picasso and Léger.

In 1923 his first solo exhibition took place in Rome. During the following years, he consolidated his style. In 1928 he was exhibited at the Venice Biennale, his works showing the influence of Etruscan art that the young artist had discovered at the Etruscan Art Museum in Rome. The flat but rich forms in an archaic style made an impression.  After the Second World War, Massimo Campigli continued to produce art and to exhibit in numerous museum institutions in France, the United States, Japan and especially in Italy, where he is known as one of the great modern painters of the Novecento. His work combines avant-garde-inspired abstraction with the figurative tradition of archaic classical Italian art. He died in Saint-Tropez in 1971.

In this exhibition we present the lithograph Interno, produced in 1965. As can be seen, the work is not numbered, it is an artist’s proof, a first attempt to test the superimposition of different layers of colors and shapes. The abstract composition and the use of geometrical forms indicate his interest in avant-garde painting. Nevertheless, the central figure seems to represent a female silhouette, similar to the Etruscan-inspired portraits characteristic of the artist.

Dated and hand signed by the art 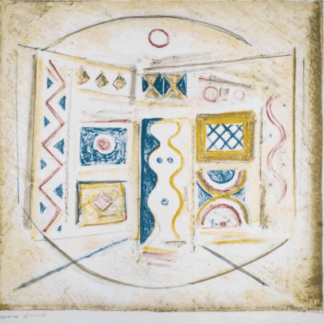