Giorgio de Chirico was born in Greece into an Italian family, and at the age of twelve he began to study art at the Athens Polytechnic School, where he pursued an academic education, placing great importance on the perfection of drawing by copying classical models. In 1906, after a brief stay in Florence, the family settled in Munich, where Giorgio de Chirico continued his artistic training at the School of Fine Arts. During this period the young artist came into contact with the work of German and Swiss artists such as Bocklin and Klinger. He also became interested in German philosophy, and the work of Schopenhauer and Nietzsche influenced his artistic style, leading to his metaphysical paintings. Later, after a brief stay in Turin, he moved with his brother to Paris, where he came into contact with the personalities of the avant-garde. He exhibited at numerous salons, such as the Salon d’Automne, among others. It was during this period that Chirico produced most of his metaphysical paintings, which later influenced the Surrealist movement. Chirico’s work in this period is characterized by the depiction of classically inspired urban spaces. The arcades, squares and architectural constructions, built with illogical perspectives, are treated in a dreamlike manner, exuding mysticism and mystery. De Chirico integrates in his works the heritage of classical art, but the artist transforms it according to his intimate universe. The landscapes are deserted, immersed in a phantasmagoric calm. The figures, anthropomorphic deformations, often appear as lumps in space; without the viewer being able to recognise a particular body, it is the evocation of presence.

The painting Mystery and Melancholy of a Street, oil on canvas executed in 1914, dates from this decade. This painting served as a model for the lithograph shown in this exhibition, Lo Sgombero, produced in 1970. This work illustrates the Italian artist’s treatment of urban landscapes and architecture. A girl is running around playing with a hoop in a deserted street, between two classically inspired buildings whose vanishing point shows the lack of a mathematical construction of perspective. In the background there is a shadow, perhaps of a sculpture, towards which the only character in the painting is moving. On the right is a cart and several bundles resting on the ground.

After the Great War and during the 1920s, Giorgio de Chirico moved away from the avant-garde trends, producing an art that was described as academic and unoriginal. De Chirico’s classical revival earned him the scorn of other artists, especially the Surrealists, who had been greatly influenced by his metaphysical works, but who saw a return to academic art as a loss of originality and artistic value. However, in spite of the vision contributed by the modern historiography of art, especially in the second half of the 20th century, Chirico’s work after the 1910s shows great artistic quality. Although it does not appear in many art history manuals, the retour à l’ordre in the art of the interwar period produced works of great quality.

Signed and numbered in pencil by the artist: roman number XXI/XXV. 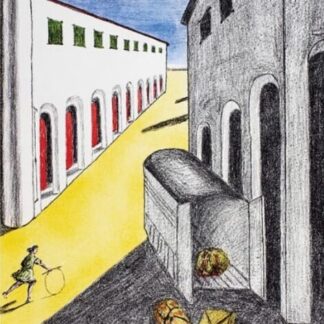