The Manteño-Huancavilca culture developed between the 8th and 16th centuries AD. The geographical distribution of this society was very extensive, occupying the coastal strip north of the mouth of the Guayás River – present-day Ecuador – as well as Puná Island and the coastal mountain range. The Manteño-Huancavilca people were noted for their navigation, which allowed them to trade with other cultures in the Andean region, going up the Pacific coast as far as Mexico. As in other Andean societies, the Manteño-Huancavilcas produced high quality pottery. These earthenware objects were used to transport and store liquids. Despite the lack of knowledge of the glazing technique, burnishing made it possible to waterproof the ceramic objects. The decoration of these objects, as well as the production of anthropomorphic figurines, testify to the numerous cultural and commercial exchanges between the different peoples of the region. Fired ceramic figurines were produced for a variety of reasons; these objects were intended to be offered as votive offerings or produced for sumptuary purposes. Differences in representation, facial expression or body posture correspond to the transmission of different messages. The anthropomorphic figures have a deformed head, broad forehead and flattened profile. This corresponds to a tradition of deforming their skulls, as reported in the chronicles of the first Europeans who came into contact with the Manteño-Huancavilca.

In this exhibition we present a round sculpture 16 cm high, made of patinated terracotta; it is exhibited on a white marble pedestal made at a later date. The work represents an upright, nude male figure. The arms and hands are attached to his sides; the fingers were made by fine incisions in the fresh clay. Both legs are perpendicular to the ground. The lack of movement reinforces the hieratic nature of the figure. The face is devoid of expression, the gaze, directed straight ahead, is lost in the horizon. Like the fingers, the eyes and mouth are the result of a fine incision in the fresh clay. The sculpture has some gaps, notably in the lower part of the legs, the right hand and at the level of the nose, from which a golden ring probably hung. 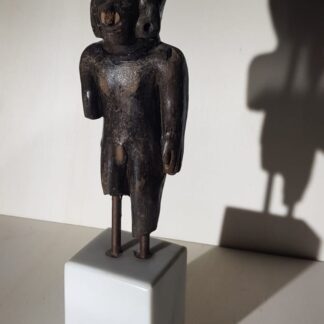